This was taken on 9/4 – which is when he originally got his costume.  Of course, in his excitement, it had to be worn whenever possible, wherever possible, and most importantly, as often as possible.

To the Post Office.  To Target.  To Moe’s (they still say “what’s up, Spiderman” when we walk in – it’s like he’s Norm or something).

Here’s how it looked on Halloween Night, trick or treating at (and around) Aunt Cindy’s house: 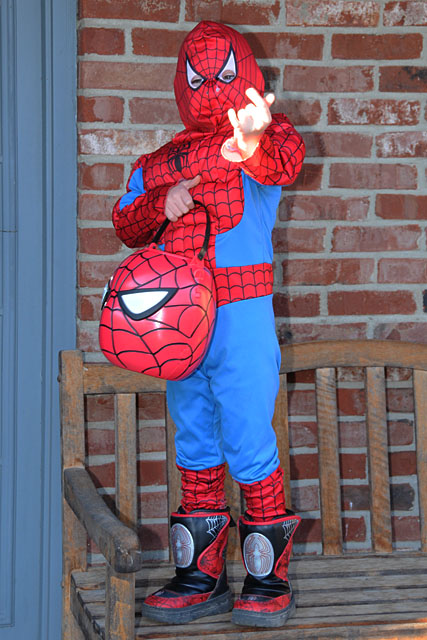 The costume held up surprisingly well, although we clipped most of the stray threads.  The bottoms of the legs are a little frayed, but they’re hidden by those absolutely stunning (and recently acquired) Super Spidey Snow Boots.  In his mind, they’re just part of the ensemble.  There are a few other places places where the fabric is borderline translucent from washing and wearing, but something tells me such details really don’t matter much to him.

We had a small Halloween gathering with the Dixon clan, complete with masks, bonfire and tractor rides through the woods.

The woods at night are a dark place – there’s just not much to light things up back there. On one trip into the woods, the tractor engineer decided it would be a good idea to make the drive without headlights. He’s done the trip so many times, it can probably be done with a blindfold, but the dark ride was a little interesting for the four travelers in the trailer.

Once the ride reached the deepest point in the woods, the furthest point from the house, the engineer just, well, disappeared. He stopped the tractor, turned it off, jumped down onto the trail and just took off – leaving the passengers to fend for themselves.

The ensuing conversation in the trailer between Cameron, Brendon, Allie and Nicholas went something like this:

At this point, it was hard to tell who was saying what. Minor panic had set in, and the mad scramble to “abandon trailer” had begun. As Cameron the Fearless led the group toward Pug Hollow, one voice was clearly heard coming from the trailer:

It was Nicholas, who was still struggling to get out of the trailer. Compared to the Dixon kids, the boy is a midget (actually, he’s pretty small compared to most other kids). His legs couldn’t reach the tire on the trailer to climb out, so he was stuck straddling the side.

The gang turned back, and in a heroic move Cameron bear hugged him and dragged him out of the trailer, and they sprinted toward the house. As the engineer watched (and laughed) from a distance, their shadowed outlines making tracks toward the campfire, there was a small pack of three, from tallest to shortest, covering ground pretty well – with the smallest and weakest of the herd trailing slightly behind. Had he been a wildebeest on the savanna, he would have been dead meat.

Looking for something? Be lazy – it’s ok with us.